Today was a free day.  We did not have anything adoption-related to do.  We decided to go out to Shamian Island to have lunch at Lucy’s and shop for souvenirs for our boys.  Shamian Island is very pretty and surrounded by the Pearl River.  It is home to the White Swan hotel which is where most adoptive families stayed up until last September when it was closed for remodeling. Because of this there are lots of souvenir shops on the island and since our boys keep asking us what we are bringing them from China, we decided it was time to go shopping! 🙂  When we first started talking about going to China, Seth asked if we could bring him a panda. He did not mean a cute little stuffed animal, he was asking for a real panda. 🙂  After we told him that wouldn’t be possible, he started asking for a Power Ranger costume.  He thinks Power Rangers are probably famous in China.  So according to him, it shouldn’t be hard to find a costume. Carter asked for a samurai sword.  Not a pretend one, but a real one.  I have a strong feeling my boys are going to be disappointed when we get home on Friday. No pandas, power rangers or swords!  But we did find them some cute gifts. 🙂

Little did we know when we entered the first store that we would be in there for over an hour!  I picked out a traditional Chinese dress for Molly Kate and then we started looking for other gifts.  We started talking to the store owner and quickly found out that he is from Leizhou City which is Molly Kate’s home city.  He asked us to sit down for tea and after politely refusing a couple of times, we realized that we were going to stay for tea!  The family was SO nice. They have one child whose name is Zach. 🙂  They said over and over how lucky we were to have many kids in our family instead of only one.  He kept saying, “lucky, lucky.”  He talked about Leizhou and how it is so pretty on the ocean and very different from Guangzhou. He said it was much smaller – only 7 million people compared to the 13 million in Guangzhou!  His wife was very sweet to Molly Kate. She kept telling her how pretty she was and showing her all different kinds of toys.  She tried talking to her in Cantonese to see if she would respond verbally at all.  She didn’t.

I tried a few sips of tea, but didn’t really care for it.  They asked what kind of tea I liked. I told them sweet iced tea and they laughed!  Zach was able to drink more than I was. The gentleman kept filling his little cup and kept talking. I could tell we were going to be there all day if we didn’t insist it was time to go.  We really enjoyed it though…it was nice to hear more about Molly Kate’s birth city.

Lucy’s was fantastic – a cold drink, grilled cheese sandwich and french fries. 🙂  After a few more souvenir shops, we hopped in a taxi and headed back towards the hotel.  It is SO nice to be in air conditioning – a luxury that I do not take for granted right now.  We plan to stay in this afternoon and evening. Molly Kate is really enjoying playing with her toys. She also started reaching out towards us today when we hold our hands out. She has smiled lots today and seems such more comfortable. Each day shows a little more of her personality. She is doing great with all different kinds of foods and has liked everything we’ve given her.  So far, her cleft palate hasn’t been an issue which is a blessing.  Over all, I think she is doing great!

We were at the souvenir shop so long we had to get Molly Kate out of the stroller and let her walk around.  The little boy kept bringing her toys. She’s holding a little pink figure.

Zach drinking tea with Dong, the owner of the shop.

I think she looks beautiful in yellow!

Hanging out at lunch with Daddy. 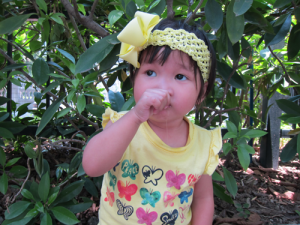 Even though you can’t tell by the pictures she is sucking her thumb a lot less.  This was right before nap time so she was tired.  It is nice to not have to keep up with a pacifier however, I hate to think about how dirty her thumb is each time she puts it in her mouth.

Molly Kate’s favorite thing to do – walk.  She will hold your hand and walk as far and as long as you want to.