VBS has to be one of the boys’ favorite weeks of the year.  They LOVE it!  They started counting down the days a week before it started and could not wait to get there each night.  I’ll admit that it is one of my favorite weeks too. However, after 4 nights of having my kids up until 9:30, I am ready for it to end! 🙂

This year Ella-Ann and Rane came and stayed with Mom and Dad so that they could go each night.  The boys were thrilled to have their cousins there each night.  They also got to play together during the days so it was an extra special week for the kids.  And despite being up WAY past their bed time each night, they all did really good!

I wasn’t able to get pictures of Rane and Ethan during VBS because their were downstairs in the toddler area while Zach and I were upstairs with the elementary age kids.  I did peak in on them a few times and you could tell they were having a lot of fun.  They were in a class with about 10-12 3-year old boys! I felt sorry for their teachers! 🙂 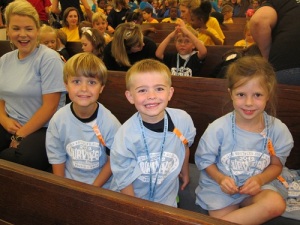 Seth was thrilled to have his friend, Cooper, in town for VBS! Love these three blonde headed kiddos!

Carter invited his friend, Drew.  They have played baseball together since they turned 5.

Seth doing the hand motions to one of the songs.

He’s wearing his braided headband that he made in the marketplace.  He wore it for 3 days!

Look at this pretty girl! 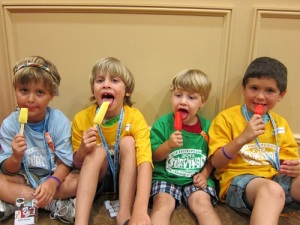 These two boys had SO much fun together.

Mom and I took the two little boys to Monkey Joe’s one afternoon while the big kids went on a hike with my dad.  This is the best picture I could get.  They would not slow down for a picture.

They did persuade Nana to pay for them to ride a few of the rides before we left to head home for naptime.  Naptime is a MUST during VBS. 🙂