Day two was the only bad weather day we had.  It started out rainy and cold but the rain ended around 10am.  The gray skies and colder weather lasted a little longer, but we were still able to go out and enjoy Hollywood Studios and Magic Kingdom.  We had breakfast at Chef Mickey’s first thing that morning.  The boys love eating with the characters and getting lots of authographs.  All I could get Ethan to eat was fruit because he was so excited about each of the characters.  Carter and Seth wore their Happy Birthday pins so they received a special cupcake and everyone sang Happy Birthday to them.  They loved it! 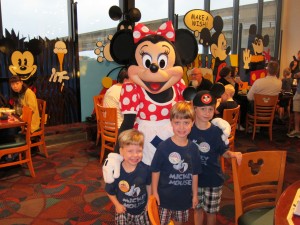 After breakast we went back to the hotel and packed our bags for Hollywood Studios.  Once at Hollywood Studios, we went straight to Toy Story Mania (Zach, Carter, and Seth’s favorite ride).  It is always a long wait so we got fast passes and then decided to wait in line too so that we could ride it twice.  We waited for 45 minutes.  That was our longest wait the entire trip…not too bad!  After riding Toy Story and Star Wars, we went to the Indiana Jones stunt show. I thought the boys would love it.  While waiting for the show to start, Ethan kept commenting about the dark cave in the corner of the stage.  I could tell he was concerned.  Not 10 seconds after Indiana was on stage, I was escorting Seth and Ethan out of the arena.  Since it was open air, they could still hear the sound effects while we were leaving.  Seth broke into a sprint with Ethan and I trying to keep up.  Poor boys…they were terrified.  They were both physically shaking by the time I got them out of the area and into a gift shop.  We spent the rest of Hollywood Studios getting authographs, riding Toy Story again, and seeing a couple of shows. 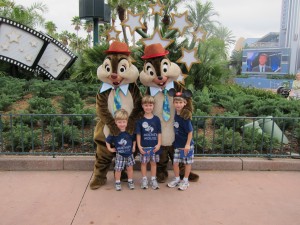 After Ethan had a quick nap, we all headed to Magic Kingdom for the rest of the day.  We drove the little race cars, rode the train, and many other rides.  After dinner at Pecos Bill’s, we stayed on Main Street to watch the nighttime fireworks.  The boys LOVED this. 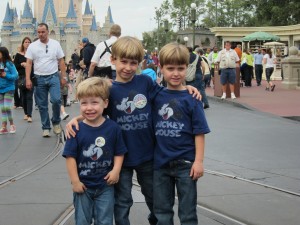