There are just too many pictures from Disney to put all in one post.  Day one started VERY early.  Zach and I were up around 4 and we got the boys up around 5.  Our flight left at 7 and we knew it would take us a while to get checked in and through security with three kids. The kids did really good but we still cut it close, arriving at the gate with only about 15 minutes until boarding time.  To say the boys were excited is an extreme understatement.  Ethan LOVED looking at all the airplanes and I don’t think he really understood that he was about to get on one until we actually boarded the plane.  The two big boys wanted to sit with Zach so Ethan and I sat one row behind them (I knew Ethan would kick the seat in front of him like crazy so I wanted it to be one of the boys).  He did kick the seat but he also put his tray table up and down about 100 times.  He loved take-off but quickly wanted to go back down. 🙂  Once we were up in the air, he was fine and enjoyed the rest of the flight.  The two big boys love to fly and they were content the entire time each playing on their own DS.

We were in Orlando by 10am and on our way to Disney World via the Magical Express.  Disney makes it SO easy – picking up your bags and delivering them straight to your room while you are transported to the resort.  After we checked in, changed into shorts (yeah!!) and ate lunch, we were on our way to the Magic Kingdrom.  The very first thing we did was see Mickey and Minnie.  They were right at the entrance of Magic Kingdom and there was not a wait.  Ethan was PRECIOUS!!  He could not get over it.  He just kept starting at them, jumping up and down, and pulling on his shirt.  He could not quit giggling.  He wanted to get close to them, but would get nervous and run back when they reached out to him.  Eventually (with some encouragement) he gave Minnie and Mickey a hug and got their autograph in his new autograph book.

We spent the rest of the day riding rides, seeing shows, and meeting different characters.  We ate dinner at Liberty Tree Tavern and it was GREAT.  We knew the boys would be exhausted so we headed back to the hotel early that night. 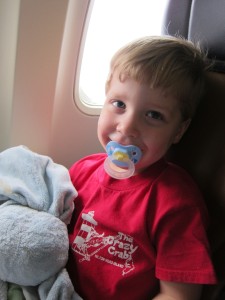 My travel buddy.  God bless his “baby” (lovey), “pappy (pacifier), and blanket.  I don’t think any of us would have survived the trip without them!  I didn’t allow him to take them to the parks on day 1 but by day 3 they were once again with us everywhere we went. 🙂

I’m pretty sure Zach got the easier row on the airplane. 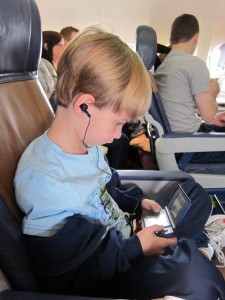 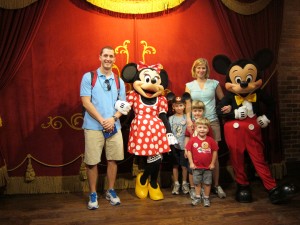 Jungle Cruise with Papa.  I forgot to mention above that my parents were with us for the first three days of Disney.  They were spending two weeks in Florida and graciously offered to help us out.  We needed the help and the boys loved having them there. 🙂