On Thursday night, Carter was in his first play at Hunters Bend.  The entire 1st grade participated in the play, E-I-E-I-Oops!  It was so cute!  Carter’s class dressed up like pigs and the other 4 classes dressed as chicks, mules, farmers, and sheep.  They sang several songs and each child had a line to say.  Carter’s line was, “the pigs say oink.”  He had so much fun singing the songs and practicing at school.  He loved the play and being in front of an audience. 🙂

Carter saying his line into the microphone.

I hate that this picture is blurry.  Carter and his friend have been in class both years together and play together all the time at school.  This picture shows how much fun they have together!

Our little piggie after the play.

Carter and another one of his buddies.

Seth finished up his first soccer sesaon.  His end of the year party was at Chuck-E-Cheese.  Seth was SO excited about this.  He got his trophy that night.  He was VERY proud.

Carter lost his very first tooth 2 weeks ago.  He was so excited!! 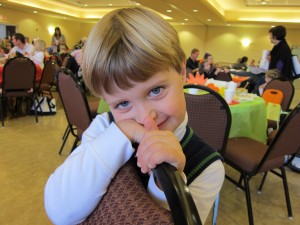 Seth’s preschool Thanksgiving Feast was last week.  Zach, Ethan, and I went up to eat lunch with him.  He really wanted to dress up for the special day. 🙂   What a cutie! 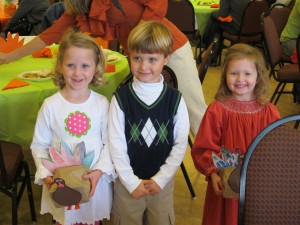 Seth LOVES playing with all the girls in his class.

Posing with Daddy and his turkey.