Seth has been counting the days until his 4th birthday. He is in such a hurry to grow up – mostly because he wants to be just like Carter. We celebrated his party yesterday at Pump It Up, an inflatable party place. He had so much fun! I loved watching him interact and play with his friends, although he played the most with his Daddy. Zach is so good about getting in there and playing with him – sliding down the slides, playing basketball in the bouncy house, running through the obstacle course, etc… (I think Zach had as much fun as Seth. 🙂

A few things about Seth at 4 years old: 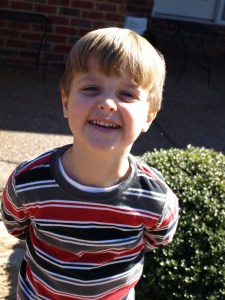