I am finally getting around to updating the blog about our Halloween weekend. The boys had been SO excited about trick-or-treating and walking around the neighborhood. Halloween is such a fun day with kids! But before we get to Sunday, I want to share some pictures about Carter’s soccer team party the day before.

This is Carter’s second season of soccer. To say that this year has been a better experience is a HUGE understatement. Carter did so well this season and really got into the game. He even scored several goals. He was also super excited to have several little boys from his school (and even his class) on his team. What a blessing to get to know those boys and their families better. On Saturday, his team (the Lightsabers) celebrated the end of the season with lunch at Shane’s Rib Shack. Carter could not wait to get his trophy (his first).

The whole crew, with the little siblings at the end of the table. They really wanted to be a part of everything. 🙂

The first of many trophies
On Halloween day, Zach’s parents came down after church. The boys were so excited to see them and spend some time carving pumpkins outside. The weather was so nice. Each of the boys had their own pumpkin and Carter even carved his own this year (with a special knife). He was so proud! Seth and Ethan lost interest pretty quick, but still enjoyed being outside with the family.

Scooping out those seeds… 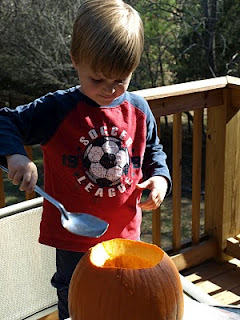 He was very careful not to touch anything!

Seth asking Daddy for some help.

He worked so hard on his pumpkin.

Ethan pretty much snacked the entire time. 🙂
On Halloween night, we went over to our friends’ house to trick-or-treat. This has become somewhat of an annual tradition and we really enjoy celebrating with our friends. The boys love having friends with them. They got so much candy and had so much fun. They were not ready to come home and go to bed but as soon as they hit the bed, they were sound asleep. 🙂

So excited to finally get dressed and ready to go!

Ethan would not stay still…

The boys with their Grandma and Grandpa after carving pumpkins.

Our trick-or-treating gang ready to go!

One thought on “Halloween weekend”