Earlier this week the boys and I left for Santa Claus, Indiana, to embark on a Holiday World adventure with my college girlfriends and their children. We made a quick stop in Kentucky to drop off Seth and Ethan at my parents’ house. I had a hard time leaving Seth, but I knew he would not be willing to ride most of the rides and definitely would not enjoy the water park (way too much splashing for his liking). After dropping them off, we arrived in Santa Claus. Here is the whole crew… 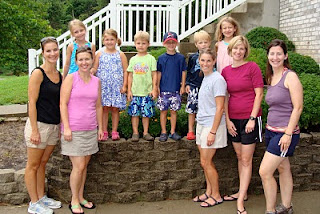 Ready for Holiday World fun!
Back row: Emma, Katie Anne, Sawyer, Carter, Jackson, Grace
Front row: Jennifer, Amy, Rebekah, me, Melissa
We spent the night with Melissa’s sister, Jennifer (who lives in Santa Claus). The kids played outside in an awesome treehouse the entire time we were there. We made them come inside to eat dinner and they were back outside as soon as they finished their food.

Most of the kiddos enjoying the awesome tree house! 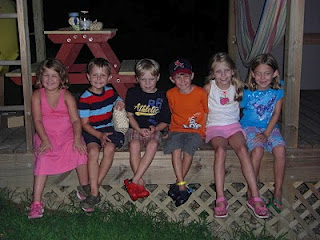 They had so much fun and play so well together!

At 8:30, we made them come inside for quick showers and then bed. We knew bedtime would be an issue because they were so excited. After a story, we turned off the light at 9:15. I think Carter was instantly asleep. 🙂 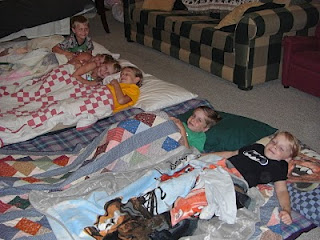 Carter’s first sleepover. He was so excited!
We arrived at Holiday World the next morning as soon as the park opened. It had rained all night so the crowds were fairly light until early afternoon. We let the kids ride some rides before we headed to the water park for lunchtime.

Our group with Santa.

First ride of the day – canoes! 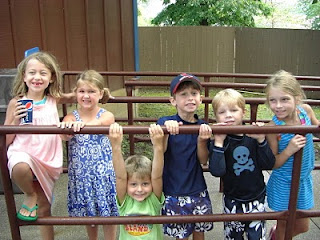 Grace (Melissa’s niece), Katie Anne, Sawyer, Carter, Jackson, and Emma
Around lunchtime, we went to the waterpark, Splashin’ Safari. The kids loved it! It was huge and they were constantly going from one thing to another. They played in two big water slide pool areas, the wave pool, floated down the lazy river (this was one of Carter’s favorite things), and rode one of the big water slides. Carter actually did pretty good considering that he is still apprehensive of getting water in his face. 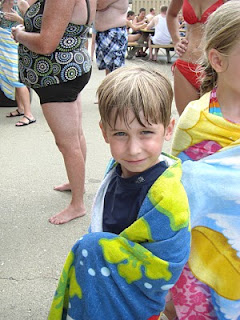 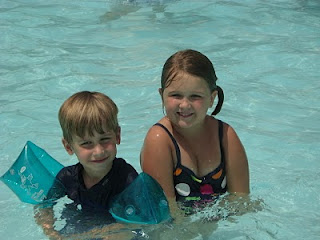 Carter and Katie Anne in the wave pool.
We had a great trip with our friends. This will definitely become an annual tradition. Our kids play so well together and, of course, we LOVE spending time together! Thanks, Melissa, for organizing the trip!