My little boy is over 8 months old now and amazes me constantly at the new things he can do. It is hard to believe that 8 months ago we were dealing with daily nicu trips. Rarely a day goes by that I don’t think about how blessed we are with his progress and health. It was such a scary time for us.

He is doing a great job sitting up. He loves being able to sit up and play with Carter and Seth. He is also army crawling everywhere. He can get to anything he wants. This is very dangerous in a house full of tiny army guns, action figure lightsabers, and legos. We are trying to teach the boys that they have to clean up after themselves constantly (and that is not working too well). Ethan also likes to blow/spit bubbles while you are feeding him. Makes for quite a mess at feeding
time! 🙂

What a big boy! He loves his loveys just like his big brother, Seth.

He also loves to play with his feet. Every once in a while you’ll catch him with them in his mouth. 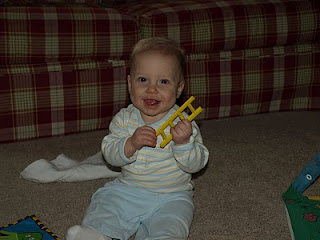 He LOVES this ladder. It goes with his Little People Firehouse that Santa got him.