Carter is obsessed with Star Wars. He definitely inherited this from his Daddy. Zach has never pushed him into liking it, but it has definitely happened. Several days a week Carter tells me that he and his friends play Star Wars on the playground at preschool.

So when we found out that Lipscomb was having a Star Wars day on Saturday at their men’s basketball game we knew that we had to go. We got there right in time to see all the characters walk on the court and then sign autographs and pose for pictures. Carter and Seth loved watching them from our seats, but once we got close enough for pictures and autographs, they were scared. I was slightly surprised since they were not scared of any of the characters at Disney, but I guess 15 stormtroopers, Darth Vader, a 10-foot Chewy, etc… can be a little frightening. After several minutes of standing off to the side, with me trying to convince them to go say hi, one of the stormtroopers came over, took off his helmet, and offered Carter his gun. He was so nice to show them they were just regular people and nothing to be scared of. After that they agreed to have their picture made with just this one stormtrooper. Oh well, at least I got a picture or two!

Watching the game. Ethan loved watching all the movement on the court.

I know this post isn’t about Ethan, but I love this picture (Katie, he looks SO cute in his little sweater – thank you!) 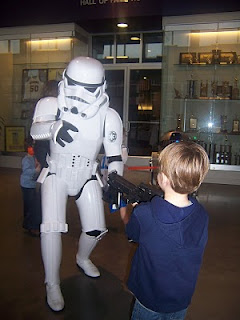 Carter shooting the stormtrooper with his gun.

Finally, close enough for a picture! 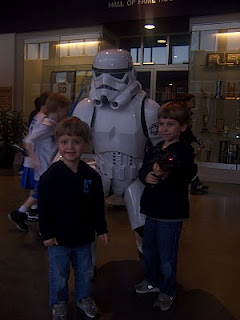 The only picture I got with both boys in it (even though it is too dark and blurry). They had SO much fun at the game.