We had such an amazing week at Disney! Despite a rocky start (Seth was diagnosed with croup 2 days before we left) and a rough ending (Carter woke up with a 102 fever our last day there), the entire trip went well.

We left early on Wednesday morning. The boys were very excited to fly. They both had window seats and stared out the window for a long time after take-off. I think I was the only nervous one!

Carter buckled and unbuckled his seat belt 10 times before we left. He loved the airplane! 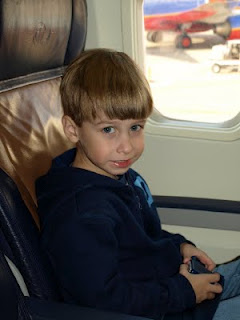 Seth was very excited. He loved the tray table – he put his coloring book and markers on it and colored almost the entire flight. I am so glad Carter and I were in front of him because he also kicked our seat the entire time.

We were given a roll of stickers when we checked in. Before we knew it, Seth had put all of them on his shirt. Then he decided to “read” the map so we would know where to go. 🙂

When we walked into Magic Kingdom that afternoon, they were having a parade. It was a perfect way to start our vacation. It made the boys SO excited to see the characters in the parade! They also asked for Mickey ears as soon as we walked in the park – so cute!

Carter checking out the parade from the stroller.

We spent the afternoon in Toon Town – riding Goofy’s Barnstormer and the train through the entire park. The boys wanted to drive the Indy cars as well. They had so much fun, but Zach and I suffered extreme whiplash. 🙂 They jerked the cars all over the place – but had fun doing it! Here is a picture of Seth driving his car. 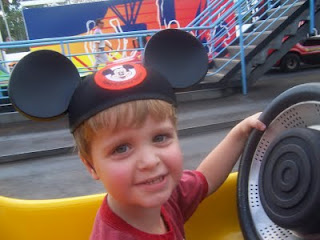 We did not have dinner reservations for Wednesday night, so we decided to go over to Downtown Disney and check out the T-Rex restaurant. The boys LOVED it! The boys enjoyed looking at the dinosaurs and they also had an area for them to dig for fossils.

Our first day of vacation was so much fun, but very exhausting. We stayed out too late and Seth suffered a major meltdown on our way home. He slept the entire ride back to the hotel. Poor boy – he slept so good that night!

One thought on “Disney – day one (Wednesday)”