Last week Zach had the opportunity to take Carter to a preseason Titan’s game. Zach’s dad works with someone that has season tickets and was very kind to give us two tickets. Carter was beyond excited but poor Seth was so upset that he couldn’t go. We assured him his time would come and he settled for a pizza picnic and a Diego
movie. 🙂

Zach and Carter left around 5 and didn’t get home until 10. Carter was still talking about the game when he got home and was so proud to show me his foam sword and game pin that Zach bought him. Zach said that Carter sat through the entire game waving his sword and watching the game. (I’m sure the fans around them just loved that!) When Carter got home that night, I asked him what his favorite part of the game was and without hesitating he answered me: the cheerleaders. I looked at Zach and he assured me that he had nothing to do with his answer. Oh boy…

Here are some pictures of Zach and Carter’s special night!

Carter on the walking bridge to get to the stadium.

Showing off his two tickets outside the stadium.

Before the game started… 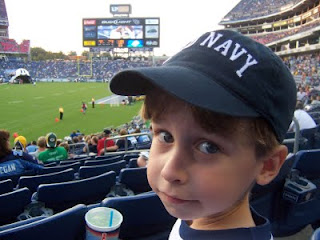 For dinner he had a hot dog and lemonade and for dessert- cotton candy. What a treat! 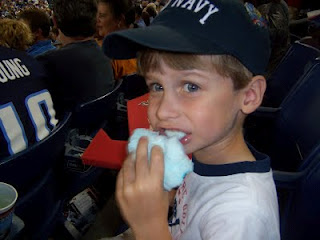 What a great night out for them! I know they both had so much fun!!