I’ve debated as to whether I want to post this. It is something I wrote while in the hospital. I don’t think I will ever forget the night I had Ethan, but I wanted to write it down just in case. It was such an emotional experience and I am so happy that I can say it has a happy ending. There were definitely some scary moments. So, this is a LONG read and I’m putting it on my blog so I’ll always have it. Unless you want the details, you can skip this post. 🙂

I woke up with a low grade temperature and body aches. I took a shower but laid back down in the bed while Zach took care of Carter and Seth. I eventually moved downstairs to the couch while the boys played around me and watched tv. Zach worked off and on until lunch time. My fever went up even more (about 100.3) and my head hurt so bad. The hardest part though was my breathing. As an asthmatic, I know what it feels like to not be able to breathe. This was different. I could NOT catch my breath. I had tried all of my medicines and nothing worked. We decided it was time to go to the doctor.

I had a terrible time finding someone to see me (evidently nobody wants to see a pregnant asthmatic with a fever–especially with the recent outbreak of swine flu). I ended up in a walk-in clinic. I think we were there for almost 2 hours. Zach took the boys next door to a restaurant to eat. It was a hard day for them, but they were really good. They missed their nap and were stuck in a waiting room for over an hour.

Seth kept asking, “Mommy, you feel better now?” Carter stayed pretty close. They are not used to seeing me sick. The doctor eventually determined that I just had a virus and the breathing problem was just the baby pushing on my lungs. We were told just to wait it out and they gave me a prescription to help with the cough (which they deteremined was from shortness of breath) and that would help me sleep. I stayed in bed the rest of the afternoon, but couldn’t sleep for long because I would wake up so short of breath, I would have to sit up for the next hour just to feel like I could breathe.

Around 3, we decided we were going to have to do something with the boys for the next few days because I was not going to be able to take care of them. (We had hired a babysitter to take care of them that afternoon). Zach ended up driving them to Bowling Green, KY to meet my parents. Fortunately, they have flexible jobs that allowed them to take off and take care of the boys on short notice.

Zach got back home around 9:00. I was feeling MUCH better. My fever had broken and I was sitting up on the couch watching the finale of American Idol. We spent an hour talking before we went to bed. Zach prayed for protection for me and Ethan as I battled this virus and we both fell asleep.

I woke up around 1:00 am with the first contraction. I laid in bed for an hour and half counting them before I woke Zach up. They were pretty regular–about every 10 minutes for almost 2 hours. We called our friend and doula, Beulah, who recommended we call the doctor and head to the hospital. The doctor on call agreed. She thought I was probably extremely dehydrated and a bag of fluids would stop the contractions. She also thought I should be seen in the ER to get my breathing under control.

We grabbed a couple of things, said a prayer, and headed to Baptist Hospital. Part of me felt really silly for going to the hospital when they were probably just going to send me right back home with false labor. The other part of me just wanted to hear them say that Ethan was fine and the contractions were nothing to worry about.

The car ride was hard. My breathing was still really bad. Soon after we arrived, I was checked in and placed on the monitors while the nurse asked me what seemed like a hundred questions. It was around 4:15am. She told us several times not to worry about the early labor, that we would get the contractions stopped as soon as I was hooked up to the IV.

After all the questions, she tried to insert the IV. I was so dehydrated, they had a hard time. They were getting ready to stick me for the third time when I started to pass out. I told Zach I felt like I was going to faint. My ears were ringing and I couldn’t focus on anything.

The next minute I heard the nurse call for help. She sounded concerned and called for several nurses to come help. She asked me to roll on my left side. At that point, I knew Ethan must be in trouble. She was rubbing on my belly trying to get him to move. (His heartrate had dropped from around 160 to 70.) Another nurse was trying to get my IV in, while someone else called the OB and told them we were a possible emergency c-section (unless his heartrate stabilized again). I can remember laying there in a complete state of shock. I was so scared and in so much disbelief that it just didn’t seem real. Zach was in the room but not near me because so many people were trying to get Ethan and me stabilized.

One minute later, we were racing through the halls on our way to the OR. I completely lost Zach at this point and didn’t see him again until after it was all over (I can only imagine his perspective at this point–seeing his wife and son wheeled into the OR while he was left standing in the hallway).

I can remember being wheeled into a super bright, white room that was freezing. Several people were around me prepping me for a c-section. The anesthesiologist was asking me questions and having me sign a consent form. One nurse was still trying to get Ethan to move positions, in hopes that it would bring up his heartrate. The last thing I remember was the mask going over my face while I heard a nurse call out that we didn’t have time to wait, this baby needed to come out now.

When I woke up, I was in a postpartum room. I saw Zach and Beulah first. I was completely out of it. Zach immediately assured me that Ethan was fine in the NICU and everything had gone okay. I had so many questions, but no energy at all to ask any of them. I saw my doctor, the doctor on call, and another doctor from their practice a few minutes later. My breathing still had not improved. They called in a hospitalist to help diagnosis the problem and also ordered an immediate chest x-ray to determine what was causing the problem. About an hour later, I was diagnosed with pneumonia. I was started on oxygen, IV fluids, and several antibiotics. The rest of the day is a complete blur.

I do remember moving from the 3rd floor to the 7th floor. On the way they took me into the NICU so that I could see Ethan. It was about 8 hours from the time I had him until I saw him for the first time. I was not allowed to touch him and had to wear a mask (because of the pneumonia) just to see him. I remember how hard it was to see him in his little bed with all the tubes and not be able to hold him. I remember feeling a crazy amount of guilt that he was born so early and would struggle for the next several weeks because he should not be here, but be safely inside of me. But more than anything, I couldn’t help but think about how blessed we were that we were at the right place at the right time and because of that Ethan would be fine.

When this entire experience is over, I want to remember how much love we felt during this time. Our friends and family were awesome and were there for us during the entire ordeal. We felt so many prayers and felt completely taken care of.

“Your ways, O God, are holy. What god is so great as our God? You are the God who performs miracles; you display your power among the peoples.” Psalms 77:13-14 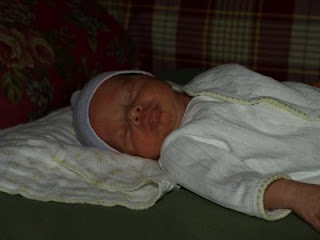