Skip to content
On Monday night we took Carter to his first soccer practice. I imagine with three boys this is the first of many, many practices that I will attend. 🙂 When we first asked Carter if he would like to play soccer, he was VERY apprehensive and informed me that he would play when he turned 10. I signed him up anyway because I knew that he would be apprehensive and nervous whether he was 4 or 7 when we started him. I also thought it would be an easier adjustment when he was younger. I was prepared for tears and him clinging to my leg, but it couldn’t have been more different. He got really excited about it over the weekend while he was at my parent’s house. I guess they spent time talking about it with him and by the time I picked him up on Monday, he was very excited! We stopped on the way home and bought him shinguards, cleats, and a new ball.

Hanging out with his buddy, Jackson. The coach had them all go around and introduce themselves. Carter doesn’t know anyone except Jackson.

Listening to directions from their coach.

Kicking the ball down the field. 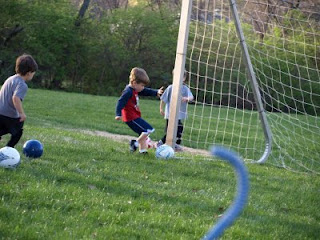 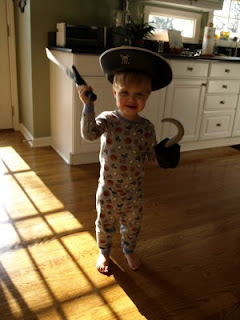 I had to throw in one of Seth. Here he is dressed up as a pirate (a daily occurance in our house). He did very good at Carter’s practice. He also took a soccer ball and played in the grass while Carter was on the field.