Skip to content
This weekend we had a family birthday party to celebrate both of the boys’ birthdays. They had so much fun seeing almost all of their family. They were especially excited to have their cousins, Ella Ann and Rane, staying at their house all weekend. This was the first time we have seen Rane (he was born January 9th). He is such a cutie and we all loved loving on him all weekend. What a good baby! I am praying that our 3rd little one takes after him! 🙂

The boys wanted to hold Rane as soon as he got there. They both did a good job but needed some help. Excuse Seth and his lack of pants. He has decided that wearing clothes is extremely overrated!

Nana, Papa, Uncle Spencer, Aunt Katie, Uncle Craig, Aunt Kasey, Ella Ann, and Rane all arrived at our house on Friday afternoon. We spent all day Saturday surrounded by lots of family. My extended family came down in the morning to see Spencer and Katie and their kids since they don’t get to see them very often. Zach’s mom and dad, known as Grandma and Grandpa at our house, came in the afternoon for the birthday party. They also had Carter and Seth’s cousin, Dylan, with them. We all had a great time, but we were exhausted after the party!

The boys had a sports balls themed party. That is their favorite thing to do so I took advantage of their common love of balls! We had plenty of balloons, a yummy football cake, and lots of good food. Seth is trying to get a head start on the cake here with Aunt Kasey.

Between Christmas and his birthday, Seth has mastered opening gifts by himself. He loves it!

They got matching firefighter dress up sets. They love them and have already worn them several times.

Seth got his own big chair. He keeps pointing at it and saying “my big chair”. Now maybe he’ll leave Carter’s alone… 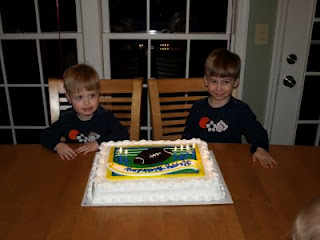 Both of the boys acting a little embarassed while we sing Happy Birthday. Seth has his tongue out, which is what he does when he is shy or embarassed. 🙂

Blowing out the two sets of candles together!

They both LOVE cake!

Carter loves his new leap frog toys. He plays both of them all the time!

Trying to get a picture of the kids after church. They weren’t too interested in picture taking and I finally bribed them into getting this halfway decent picture. Poor little Rane is not happy! 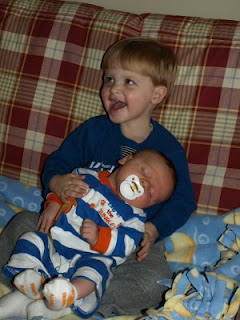 Seth wanted to hold Rane all weekend. He loved on him so much!! He’ll be a great big brother!

It was a great weekend! Thank you everyone for coming and celebrating my boys’ second and fourth birthdays! What a fun time with all our family!!