Skip to content
We have stayed pretty close to home for the last several days and it has been so nice! The boys have enjoyed being home with Mommy and Daddy and just having some play time. Carter loves to have Seth watch whatever he is doing and Seth loves to watch everything Carter does. It is really sweet and I can’t wait to watch them play more and more together as they get older!

Last Friday we did go visit my extended family in Kentucky. We had a great visit and Carter and Seth enjoyed all the extra attention they received. Aunt Connie gave Carter a microphone and he loved performing for anyone that would listen. He loves to sing songs! Uncle Wayne gave Carter a football and he has played with it every day since we got home.

Carter went back to preschool today. He is doing really well. He doesn’t cry at all when I drop him off and he talks a lot about the things they do at school. Today is his first show and tell day. The directions told him to pick something red and most of you won’t be surprised to learn that he took a ball. 🙂 I’m anxious to hear about his day when I pick him up this afternoon. Seth is rolling everywhere! As you can see in one of the pictures below, we often find him stuck under the couch or coffee table. He loves to sit up and is doing better about sitting on his own. I got Seth’s 6 month portraits back yesterday and you would be amazed to see how different he looks from Carter’s pictures. He definitely has taken on his own little identity, in looks and personality. It so fun to see how different they already are!

This is definitely a random post, but I wanted to post something before we leave for vacation on Friday. We are all so excited!! Carter talks non-stop about going to the beach. This morning before preschool as we were getting in the car, he asked if he could go to the beach before he went to preschool. 🙂 I just hope he loves it as much when we get there!!

Seth has figured out how to get out of the bumbo seat. We left him in it on the floor at my parents house one morning and when we turned back around he was out and under the table. 🙂

Waiting to be rescued by Mom or Dad!

This was Carter’s new game on Sunday. He is playing so much better since he started preschool!! WooHoo! 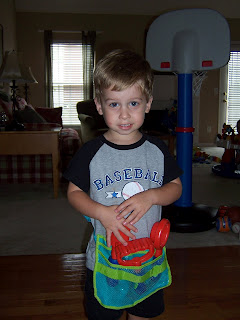 Ready for the beach! I gave Carter his beach tool belt yesterday and he wore it for over 5 hours. He is so skinny I had to wrap it with a rubber band in the back so it would stay on!

All smiles for the camera!

One thought on “Playing together”