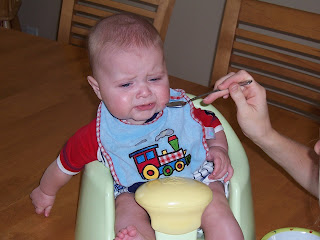 Seth tried baby food for the first time last week. His feelings about the rice cereal and applesauce are quite obvious from the pictures! We have continued to try every day but with the same results. He just doesn’t like it! I don’t think he has ever swallowed any of it. He works and works until he has spit out every little bit that I put in his mouth. Carter’s solution is easy, “Just try a different color Mommy.” He is just positive that Seth will like the orange baby food. 🙂 Carter loves to “help” me feed Seth.

This week has brought us several reminders that our firstborn is becoming quite the “big boy”. Preschool time is near and we have started having conversations with Carter about going to school. I ordered him a lunch box and got it monogrammed with his name and a ball on it (I spent way too much, but hey, I’m a first time preschool mom and am very excited about it!) He seems to be excited about going to school and playing with his friends, but most importantly (to him at least), he wants to play playdough and play ball. 🙂 I just know that he will love the time he has at school.

Another example of our big boy: On the way home from church this morning, we were asking Carter what he did in class. He usually talks about several things (played with toys, played with friends, sang songs, etc…). This morning he said they talked about Joseph’s new coat. We asked him, “What?” and he repeated himself: They talked about Joseph’s new coat of many colors. Amazing…kids learn so quickly and soak everything up that is presented to them. Such a reminder of the importance of our words and actions!

One thought on “Yuck!”