We had a very busy 4th of July this year. We started our day by driving to Zach’s parents’ house in Hendersonville. Zach’s sister and her family were there as well. We had a great time visiting with everyone. Carter loved playing with his cousins. He was very well occupied the entire time we were there. Seth was a sweetie and posed for several pictures with Dylan, who is only 2 months older than him.

Seth and Dylan propped up against each other in a chair!

We left Hendersonville late in the afternoon to go to a Family Picnic at Lipscomb. We met our friends and their kids there. It was SO hot, but we had a good time. The kids played on the inflatables and just ran around and played. We ate dinner there and had church after that. Craig and Kasey were so sweet and offered to keep Seth at home while we went to Lipscomb. That was such a blessing because it was so hot that Seth would have been miserable. We had to leave church early (Carter wasn’t really cooperating) and got home in time to watch the Franklin fireworks from our front yard with Craig and Kasey. It was a great day! 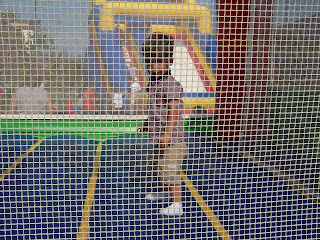 Carter wanted to jump in here but would only stay a minute or two before he wanted out!

What a good Daddy! Carter wanted to go down the slide, but couldn’t by himself. Zach took him down 4 times. The hardest part was getting both of them to the top…what a climb!

What a cute group!

I took these next two pictures tonight. Zach decided to mow our dead grass and Carter cried in the house until I finally let him take his mower outside. He followed Zach around the entire yard. It was so cute! 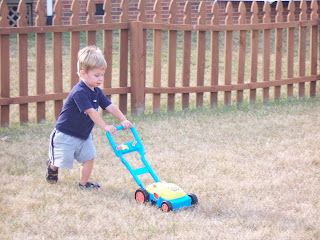 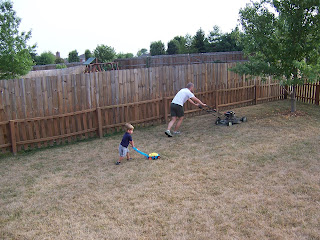 One thought on “Our 4th of July”