Skip to content
While Zach was out running this morning, a pretty yellow lab dog followed him home. An hour later the dog was still sitting at our front door waiting to come in. Carter spotted the dog after breakfast and spent the next 30 minutes at the door “talking” to the dog. Carter would get a ball and hold it up to the dog and then throw it. I’m sure the dog was getting quite frustrated with Carter. Unfortunately (for the dog and Carter) I was not about to let the dog in or Carter out since we did not know who the dog belonged to. We decided after a few hours that the only way we were going to get the dog to leave would be to get in the car and hope he followed us back to the place where he originally started following Zach. He did follow us out of the neighborhood and we are hoping that he made it home safely! Of course, now Zach is convinced that we need to get Carter a dog! 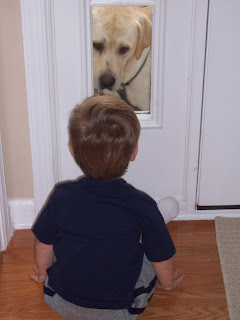 Carter looking out the window at his new friend!

Seth has found his hands and fingers and loves to chew on them!

This was one of our favorite shirts of Carter’s and we were so excited to put it on Seth.